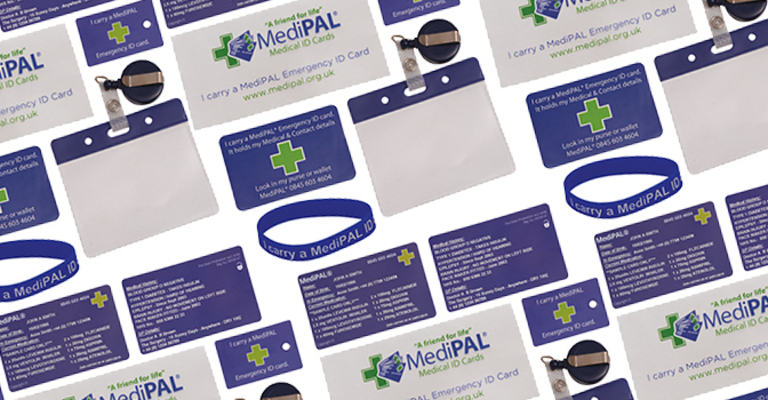 I have found it very useful. On admission to hospital with an AF attack I was able to hand over the (MediPAL) card for them to note all the information they needed rather than trying to talk through the oxygen mask.

Also when my doctor retired and I was transferred to a new practice I just gave him the (MediPAL) card so he could get all my details on his system.

Wouldn't be without it.

Simon sent an email to us today saying "I would like to thank you and your colleagues for such a great service regarding my recent order. The card arrived yesterday along with the fridge magnet and key fob card. A terrific service and I think a well done all round is required. Thank you."
Simon - Banffshire

Jeremy recently updated his MediPAL card and dropped a line to tell us he had just returned from 5 days in hospital. His card was a great help and admired by the nuses and doctors.
Jeremy J.Winter - Chichester - West Sussex

I was involved in a road accident and not able to communicate. Paramedics found my MediPAL card and used it to pass on to the staff at the hospital until they found my records. He travels abroad and of course he carries his card with him !
Mr A E Fearria - Chatham

Joanne wrote to MediPAL ' I haven't had to use my card in an emergency, but it has come in handy many time at Hospitals, Dentists and Doctors knowing what medication I take & the dosages etc. I could never remember it all in my head. Thank you for an excellent service.
Joanne Mills - Norwich

I have some good news though. I had my MediPal card on me when I went in for the operation - and when 'it' developed 'complications' (my smile isn't quite the same - they had to sever a nerve to 'save' the blood-flow to my brain). Fortunately, they had my 'personal possessions' to hand - and there was my MediPal card - effectively saying i had no allergies and don't take medication- so they pumped more anaesthetic into my (already battered) system, with gay abandon.
They (the surgical team), were impressed, saying that it (the card) saved them a least an hour of further ' testing', to which I would have been oblivious, because all they needed to do was to make one phone call to my doctor (details on the card) to confirm that I was, under normal circumstances, as fit as a butchers cat. Ms Ahmed (my surgeon) wants to know why everyone doesn't carry a MediPAL (as does the anaesthetist team) card!
Since my operation I have met, literally hundreds of people who want one (including medical staff).
Dom Forizzi - Barrow